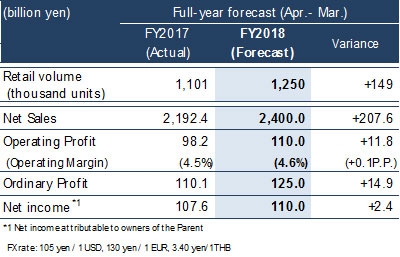 ASEAN sales increased by 33% to 275,000 units, driven by orders for pick-up trucks in Thailand and the strong performance of the new XPANDER MPV, launched in Indonesia last September.

In China, sales rose 55% year-on-year to 136,000 units due to demand for the localized Outlander.

Sales in Japan increased 23% year-on-year to 98,000 units. The growth was driven by encouraging demand for Kei car models including the „eK Wagon“ and „eK Space„, as well as for the Delica D:5 and other „Active Gear“ series.

The XPANDER is part of a product offensive at Mitsubishi Motors, which also includes the new Eclipse Cross compact SUV. Initial Sales of the Eclipse Cross, launched last year in Europe, are being followed by sales in other important markets including Oceania, North America and Japan.

MMC forecast that global sales in Fiscal Year 2018 would increase by 14% year-on-year to 1.25 million units. The Eclipse Cross and XPANDER, which we launched last fiscal year, will contribute to the volume growth in this fiscal year. Regionally, our growth will be driven strongly by ASEAN, and by China in which production capacity will be increased by our local joint venture and the dealer network will be enhanced. The sales recovery in Japan will also support the growth.

MMC’s financial forecast for Fiscal Year 2018 is following; Net sales are projected to rise 9% year-on-year to 2.40 trillion yen. Based on the exchange rate assumptions that reflect severer market environment than the last year, MMC expects to achieve operating profit of 110.0 billion yen, representing 4.6% operating margin. Net income is forecast to be 110.0 billion yen.

Osamu Masuko, CEO, said: „To reassure that we are on the right track in continuing reform initiatives to ‚rebuild credibility,‘ FY2018, the second year of the MTP, is a very important year. While making aggressive investments continuously to ‚establish a foundation for profitable and sustainable growth,‘ we will use our best endeavors to ‚expand the size‘ and ‚improve COP margin,‘ all of which are the goals we announced today.“

Mitsubishi Motors Corporation is a global automobile company based in Tokyo, Japan, which has a competitive edge in SUVs and pickup trucks, electric and plug-in hybrid vehicles. The company launched the i-MiEV – the first mass-produced electric vehicle in 2009, which was followed by the OUTLANDER PHEV in 2013 – a plug-in hybrid market leader in Japan and Europe. Mitsubishi Motors has 30,000 employees and a global footprint with production facilities in Japan, Thailand, China, Indonesia, Philippines and Russia. Models, such as the PAJERO SPORT/MONTERO SPORT, TRITON/L200 and OUTLANDER play a major role in achieving its growth. The global sales volume in fiscal year 2017 was 1,101,000 units, and the net sales of Mitsubishi Motors for fiscal year 2017 was 2.19 trillion yen. MMC is listed on the Tokyo Stock Exchange.